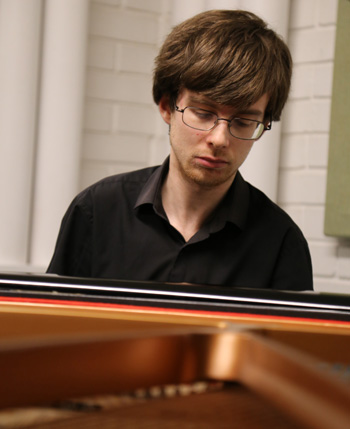 Dominic Degavino is sponsored by The Countess of Munster Musical Trust

Dominic Degavino studied first in Manchester and then at the Guildhall School of Music and Drama in London. He has since appeared in many venues around the UK, both as a solo pianist and playing concertos. He has won several competition prizes and also broadcast on BBC Radio 3.

As well as pursuing his solo career, he performs extensively in chamber music, with a variety of ensembles, and as an accompanist. His wide-ranging programme includes a Beethoven sonata and pieces by Bach, Chopin and Schumann. He also plays music by Robert Schumann’s wife, Clara, and by the English composer Oliver Knussen, who died in 2018.